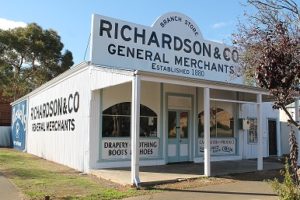 The Shire of Woodanilling identified the need for a men’s shed back in2010. In August 2011 they commenced negotiation to purchase the old Richardson Store from the then owners.

The process was slow, but in June of 2013 the council was ready to call a public meeting for all men interested in forming a men’s shed in Woodanilling.

A steering committee was formed, and with the help of Bill Johnson from the Fremantle group, who had all the paperwork that was required and the committee was underway.

It then took until March 2014 before a general meeting of all the men’s shed members, and all our shire Councillors was held, where the lease documents were signed.

The council had spent $83,568.80 to this point and then gave up a further $15,000.00 to do the restoration work inside and out. This required cleaning and painting, as well as getting power and water into the building, followed by new gutters and rebuild the front veranda after about 20 years of neglect.

By the 9th of May 2015 we had completed everything that we had originally set out to do to the building with the final touch being the restoration of all the sign writing.

Since then, we have enclosed the undercover area at the back of the shop with a roller door and poured a concrete floor. This is now the metal work shop. We bought an old garage and did it up and turned it into the timber shed. Cleaned up the back yard and covered it with gravel which now gives us more storage space.

Our Objectives are to: